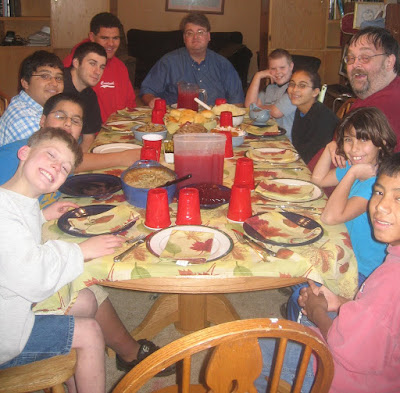 This morning Bart spoke from Luke 14 about the Great Banquet.   And he told the story of what happened to our family way back in Thanksgiving of 2005.

I realized he left out a few things this morning, so I went back to my blog to read what I wrote.  It remains a powerful story that still brings tears to my eyes.  I wrote this on the Wednesday before Thanksgiving:


Bart came home from our ecumenical service with news that one of the local legends, a 40ish mentally ill man in our community approached Bart directly at church last night with a question. A little background: he had lived with his mother all his life and then a couple years ago she died. He has a county social worker and if he is on his medications he is doing fairly well. When he gets off them, he forgets to bathe and has all kinds of interesting behaviors. Right now he seems to be in a pretty good place, but he still has interesting behaviors.

Apparently, in front of the other pastors before church last night, this man asked Bart if he could come to our house for Thanksgiving Dinner. He said, “if you are going to be here, could I eat dinner with your family? I’m so lonely and I don’t have anywhere to go.”

Bart told him he would talk to me, so when he got home Bart told me the story. Bart had preached from Matthew 25 on Sunday, one of our favorite passages. Bart shrugged his shoulders after telling me the story and then said, “Jesus has asked if He can have dinner with us tomorrow.”

Tears came because yes, this is indeed the case. This man would definitely be referred to as “the least of these.” And tears also came because I married a man who so completely shares my passion for reaching out to the least, the lost, and the left out. And tears came because he is so able to clearly see this truth  And because we will be very stressed out worrying about how our kids will respond.  And because it will involve more pressure for him in preparing the meal.  But he is still said yes.

And then I wrote these words the next day, after we had finished our Thanksgiving dinner.


I was so incredibly proud of all my kids today. They were appropriate at the meal and treated our guest with respect. They expressed to him that they were glad he could be with us. They used all the manners they had and really did well. And our guest was so very very grateful. Said thank you at least five or six times before the meal, another 10 during the meal and four or five more times on the way home. He even called an hour later to say thank you again.   He showed our kids what it means to be grateful.

This was probably the calmest and best Thanksgiving Dinner we’ve ever had.