Locus of Control and Kids from Hard Places (I know, sounds boring) 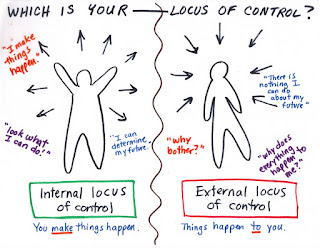 Our new congregation has a very fascinating member.   A retired child psychologist, now eighty, Frank always inspires me.  He is still sharp as a tack and has many interesting stories to tell and ideas to share.

Last week we had a choir holiday party and I asked him about his dissertation.   He told us all about it and it was fascinating.   He was studying the difference a life-simulation game (not electronic because it was years ago) made a difference in locus of control among high schoolers.    I can't believe that I had never thought about locus of control as it relates to children from hard places.  Now I'm sure that if I googled it, I would probably find out that others have talked about it for years, but it was a new thought to me.  According to Wikipedia,


Locus of control is the degree to which people believe that they have control over the outcome of events in their lives, as opposed to external forces beyond their control. Understanding of the concept was developed by Julian B. Rotter in 1954.

It dawned on me that this is one of the issues that is central to many of my children.   Somehow their trauma, whether it was abuse, neglect, prenatal exposure, or attachment issues, resulted in them believing that they have zero control over the outcome of events in their lives.

I'm sure it doesn't surprise you if you know me well that I have a very strong internal locus of control.  I truly believe that I can do anything that I want to if I try hard enough and have enough time.   Nothing out there is out of my reach.  Now obviously, there are many things that I choose NOT to do because they don't interest me:  Go to med school, run a marathon, learn how to quilt, etc. etc. etc.  But that doesn't mean that I don't firmly believe that if I wanted to do any of those things, I could do it.

I'm sure that at times this strong internal locus of control is annoying to people around me.   I don't have a lot of patience, I probably appear arrogant, and if you have to work with me I may believe that we can do a lot of stuff that everyone doesn't believe is possible.   I'm sure that as a mom, not realizing my kids had this issue for two decades, has been incredibly frustrating for those of my children who do not have the ability to make this switch.

I won't tell you which of my children has been able to learn an internal locus of control, but a few of them had and it has made all of the difference for them.  Once they begin to believe that they can control things in their lives, instead of letting their lives control them, they have made great progress.

I've started to pay attention to the language of some of my kids and to help them understand this concept.  It is interesting now that they are adults, to watch them wrestle with this.  I've also become more compassionate as I have attempted, over the past few days, to feel what they are feeling.

What if I really believed that there was nothing I could do to change the circumstances around me?  What if I felt like I had to continuously respond to what was thrown at me, without the power to change it?

I think it would make me want to do virtually nothing.

So, what have I missed?   How many thousands of articles are already out there that I haven't seen about locus of control and kids from hard places?  Is this a new idea to you?