It Was a Happy Thanksgiving

Pictures to come, but we had a really good Thanksgiving. For the first time in years there was really zero stress... other than Dexter ... but I'll tell you about that in a minute.

So, we started the holiday season with five kids living at home -- up from 3 two weeks ago. Sadie is now at home working full time and Tony (who quit Job Corps early but later was told they were going to call it a completion) is home not doing much. But now that they have told him he completed he should have some transition help and maybe they can get him a job.

Rand was the first to show up and arrived about 2 on Wednesday afternoon. He was happy to be home and planned to stay until Thursday afternoon as he had to work on Friday.

Kyle and Christy stopped by on Wednesday night for dinner on their way to Oklahoma to spend Thanksgiving with Christy's sister. They dropped of Dexter, the new Puggle puppy, who has been terrorizing Gizmo since. We figured out that Gizmo is 77 and Dexter is 2.5 in people years, and the old man wanted nothing to do with the puppy. And the puppy wanted to play. So it was comical and yet annoying to hear the puppy barking and trying to get Gizmos attention. However, Gizmo was not amused. He has been very patient but he just stands there while Dexter yelps and yelps and looks at him like "Can you please shut up!"?

Salinda and Gabby arrived after I went to bed on Wednesday night. Bart did an amazing job of cooking and was up late Wednesday and up early Thursday to make our typical feast.... lots of appetizers, turkey, stuffing, mashed potatoes, sweet potatoes, homemade buttermilk roles, green bean casserole, and four choices of pie for dessert -- homemade - apple, cherry, pecan and pumpkin.

Mike, Aiden and Tessa showed up around 10 a.m. and it was so fun to see Aiden -- he is getting so big. He only weighs 8 pounds less than Gabby and Gabby is almost three. He looks more like Mike every day. Mike seems to be doing well right now -- has a job at a tattoo place that he likes and has stayed in the same apartment for 5 months.

So we had dinner. Everyone was appropriate and kind of quiet. It was weird since some of our meals have been very stressful. The guests stayed until around 3:30 or so and then the house cleared out. Those at home watched a movie last night... it was a good day.

John is back in jail for a probation violation and we didn't hear from Ricardo. Jimmy got himself into trouble at Job Corps so he couldn't come for Thanksgiving. He should be home for two weeks at Christmas though.

Life continues to go at full speed. My job keeps me incredibly busy and then there is family and friend stuff that keeps us going. It's a new phase of life.

We are still waiting to hear if Leon can wrestle varfsity and we could use your prayers that for his sake and mine he gets a job soon.

I am hardly ever online any more. Haven't sold a book in months. Am hardly on Facebook. Don't have time to blog.

But things are ok. God's good and I'm grateful. 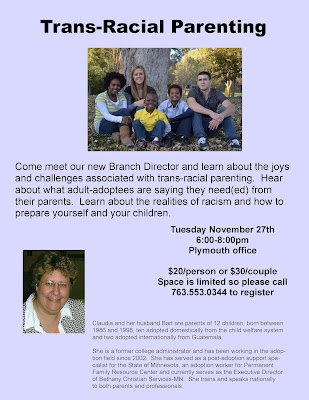 This event will be held here at Bethany. Would love to see you!
Posted by Claudia at 7:45 AM No comments:

Came to blogger to put up a poster (to follow) about a transracial parenting seminar that I'm going to be doing here at Bethany in a couple weeks and thought I better let you know what was up over the past couple weeks.

1. Sadie completed Job Corps and moved home. She had had a phone interview for a seasonal job at Target in the bakery the Monday before she completed the program and the day after she moved home she had a face-to-face interview and got the job. She was supposed to have training on the 27th, but somehow that quickly got moved up and she started working full time last Tuesday. It's a great opportunity for her -- being a pastry chef is her ultimate goal -- and she is getting full time hours. She's very proud of herself for completing the 1 year program in less than 6 months and we are proud of her too. She turned 18 this past week. I'm now parenting only 4 children -- the rest are adults!

2. Tony quit job corp without completeing Tuesday morning. He had gotten in trouble again and instead of going to the review board to ask to stay longer, he just quit. They called us in the morning, he was at the airport by evening the same day, and it has been a real jar to the family system to go from 3 kids home to 5 in just a week's time. He is looking for a job and already beginning to push my buttons. Fortunately he did get his GED.

3. Mike and his son Aiden and Aiden's mom stopped by for a while yesterday. That was fun. They should be back for Thanksgiving.

We are having our Thanksgiving on Thursday this year (we had switched it to Fridays so more could come but it wasn't making a difference) and at this point are expecting to see 8 or 9 of the kids...

Life continues to be busy. I have pictures from a month ago on my camera that I keep saying I'm going to post. I will. Someday. I promise.

Surprise! I have a few extra minutes this morning so I'm going to quick share something with you.

Over the past couple months we have been attempting to rearrange our ridiculous cell phone bill situation. It's a very long story and it has taken a very long time to iron things out, but by the end of today we should have it done.

As part of all of this in the past month I have been able to be a part of seeing four people besides me either get new or used Iphones . Today the fifth will be receiving his. I cannot tell you how much FUN it is to bless someone -- and blessing them with a piece of technology -- ESPECIALLY an Apple product -- I'm not sure it gets much better than that.

So in the midst of all of my busy-ness with work and all that needs to be done, I've been having fun paying forward the blessings I've received.

I suggest you do that today. If you are overwhelmed or feeling not-that-happy -- go do something nice for someone. It will make your day...week...month.

In the past I have blogged that life is a blur... very full and very fast-paced. But never before has it been so much of a blur -- so full and so fast-paced -- that I haven't been able to find time to blog. But apparently that time has come.

My job at Bethany is very time-consuming and intense. When I was working from home I would work 15-17 hours some days, but I apparently was taking breaks or something because I sure wasn't as tired as I am now. I used to hear people talk about how they didn't want to touch a computer after working 9-10 hours a day on one, but I never felt that way. I could be on the computer for 15-16 hours a day and never get tired of it. But now, I come home and I just don't want to touch the thing. (please, don't faint).

Another thing that has changed is that I am getting more involved in church than I have for a while. I sing in the choir and play bells which takes 3 hours of my Thursday night... The women there are determined to turn me into one so I've joined "elizabeth circle" which meant crocheting a scarf. I know, I know, just don't even comment on that one. I have some friends that are very good "servants" and am trying hard to be more like them, but I still believe that I am a much better "servee" than a " servant." But this involves extra time -- and extra thinking time about how to do it. And every Sunday evening we have people over for dessert from church (a dozen at a time) to get to know them. We have had about 200 people come and it's been fun. We started the first of August and still have a ways to go.

And then there's our social life. For the first time ever Bart and I can leave the house completely worry free and enjoy ourselves. So we have been! We have been to people's house for dinner, gone out to eat with just one other couple (something that we rarely got to do before (sans kids) and have enjoyed other kinds of outings. I am loving all the social stuff -- Bart is getting warn out -- so occasionally I don't plan something but I have to work on controlling myself.

Our kids are fine. There is some unbloggable news.... that I'll have to share another time. A quick update on the kids: Wilson has just started wrestling and is very excited about that. Dominyk never complains about school and has a couple of good friends that he does things with socially (a first in his life at age 16). Leon has just started wrestling as well but I apparently I am going to have to take on the MN State Athletic league about his eligibility because he is not attending the "attendance area" school. Please help us pray about this because he has been quite depressed and was looking towards wrestling as his salvation and now it is at risk.

Sadie has finished her GED and is now done with her culinary program at Job Corps. Since it is a 1 year program and she is done in less than 6 months, we are very proud of her. She will be moving home on Thursday or Friday of next week. Has a job interview Monday at the Target Superstore bakery. We are crossing our fingers that she will get it.... I'm a bit nervous about her return home, but taking things one step at a time.

Tony completed his GED at Job Corps as well! He almost got kicked out because of behavior, but apparently they are going to let him stay. Jimmy is also in trouble there often, but so far they are both still there. WE are planning to get them for Thanksgiving... assuming they are allowed to come home and haven't been kicked out.

Rand is doing well. We hear nothing but positive from and about him. Mike seems to be quite stable and Tessa and Aiden apparently are doing well. Isaac was here last weekend and was the cutest he's ever been. We babysat and Courtney then stayed a couple extra days with him/us. John was in jail for a bit this week, not sure why.

Ricardo is now out of jail. We seldom hear anything from him. Salinda and Gabby seem fine -- she is having car trouble, but otherwise we don't hear much. Kyle and Christy closed on the new house they had built and have bought a very cute puggle named Dexter.

Bart is happier than he has ever been and he nad I both are challenged by our jobs. We love our new home and are very content with how things are at this moment. We are enjoying it while we can as we know things can change at any time....

That about sums it up.... Pictures above I stole from their facebook pages -- the three grandkids and the new grandog...... 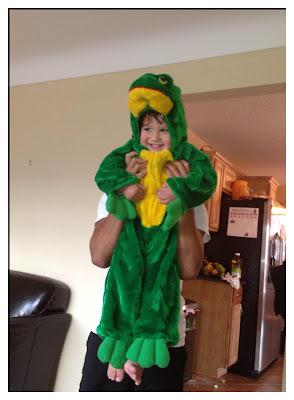 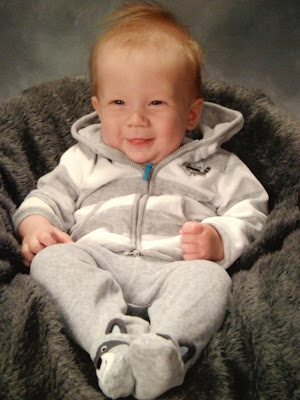 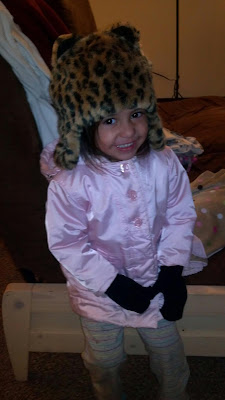 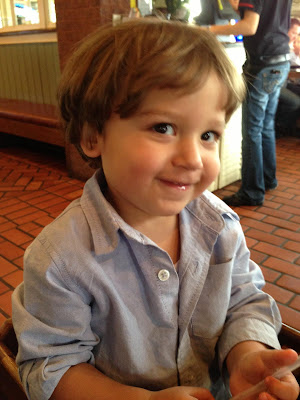 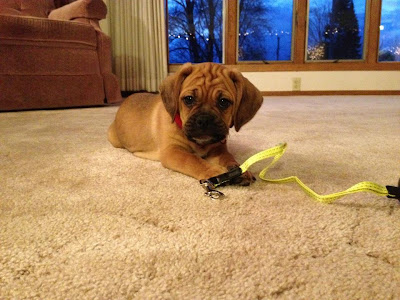 Posted by Claudia at 9:50 AM No comments: