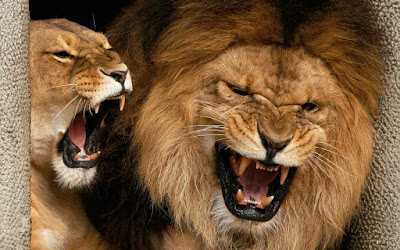 I was rereading the story Daniel in the Lion’s Den this morning.   We look back at that as if Daniel was so brave heading into the den.  I’m not sure he felt that brave as he headed into the den.

Grant it, he was brave to obey God, knowing the consequences, when he chose to disobey the king, but I don’t know that, when it came right down to it, he headed into the lion’s den confident that God would protect Him.  Maybe he did, but the lions were still big, strong, and probably hungry…. and he may have been very nervous.

I wonder if he was scared the whole time, or if after the first few minutes her realized God was going to protect him.   I can see it both ways — he was in the den for five to ten minutes, and still alive, so maybe he relaxed and said, “God’s got this” and took a nap.   We don’t know for sure.

It could very well be that he stressed out all night long, pinning himself up against the wall of the den keeping an eye on each lion, waiting to see what was going to happen.  He could have been a nervous wreck all night.

So what are our lessons from this story?

1)  Even if we are facing extreme consequences, we need to be obedient.

2)  We have a choice when we are in the midst of a scary or uncertain time, where the enemy is close at hand.   We can relax and remember that God’s got us, or we can fret and pace and hold on with white knuckles waiting for the trial to be over.

The cool thing is that God isn’t going to stop being God if we stop being confident in him and stop having faith.  He’s just going to keep on doing what He does.  But the quality of life that we can have during that time is our choice.

So whatcha going to do the next time you’re thrown into the lions den?  Are you going to immediately recognize that God is protecting you and relax knowing that the trial will some day be over, or are you going be freaked out every single moment, stressing out and questioning whether or not God is going to continue to come through?

THAT is up to you.

Posted by Claudia at 7:07 AM No comments: 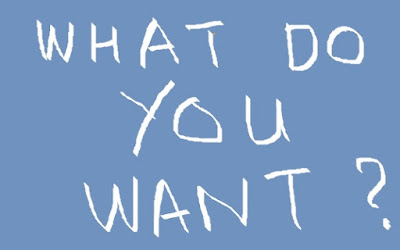 In Mark Chapter 10, Jesus and his disciples are walking in a huge crowd down the road when they hear a voice coming from the side of the road from a blind beggar.  Everyone kept telling him to shut up but he kept crying out, “Have mercy on me.”

So Jesus calls him over and says this very important words:
"What do you want me to do for you?”
Bartimaeus responds, “I want to see” and Jesus tells him that his faith has healed him.  He gets up, and, interestingly, instead of running home to tell his family or friends, or going off to look at places or people he hasn’t seen in a long time (we don’t know how long) he follows Jesus.
If Jesus was standing in front of you today and said, “What do you want me to do for you?”  what would you say?
Maybe our lack of clarity in what we really want is what prohibits us from making the right request of Jesus.
Check out this song.  Maybe this is what we should be asking.   Brandon Heath basically says, “I want to see.”

Posted by Claudia at 7:02 AM No comments:

*Note:   Our family is going through some tough stuff which has made me drop off of social media.  But I thought I'd share this .... because it really has been a secret to us making it through the hard times and it's going to get us through this one as well.  Well, that and a lot of prayer, patience, grace and reliance on our big God.

Tonight I get to do “stand up” in front of a group of parents at our conference in Virginia Beach who are caring for kids from hard places.  I love to laugh — and I love to make people laugh — and we have survived the last 22 years by laughing.   A lot.  In fact, I share with folks that this has been the secret to our survival — being able to see the humor in so much of what we’ve been through.

In fact, even this past couple weeks we have been able to find ways to laugh in the midst of it all.

I shared the end of this Psalm with you a couple days ago.

Here’s how it begins:

Finding things to be thankful for and reasons to laugh and to recognize God’s goodness in the middle of the mess, whatever you’re going,  through is always an option.

In fact, the very fact that God rescued us, changed us, redeemed us, saved us, forgave us, transformed us, …. that’s worthy of joy and laughter in and of itself.

So find something that makes you laugh today….

Maybe this will.  You don’t have to read it — but here’s a glimpse into what life was like when I wasn’t representing anyone but myself when I blogged.  This is one of the more appropriate entries I found when looking this morning and it was during the time when we had a bunch of teenagers who were not doing legal things.    It was a dark time, but we still found lots of things to laugh about.  Here are a few of them.   Enjoy the memories.  I sure did.