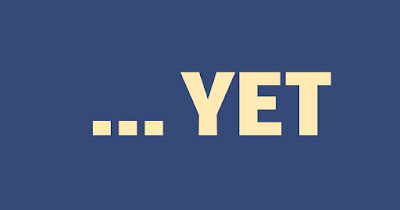 Have you ever wanted something so bad that when it didn't happen for a while you stopped believing that it would?  Those kind of feelings are when the word YET comes into play and reminds us of the promises of God.

In Acts 7, Stephen was giving a history lesson to the Jewish council.  It escalated quickly as he gained momentum and began to basically call them murderers, which lead to his death, but I digress.

Early on in his speech Stephen reminds them that “Abraham left the land of the Chaldeans and lived in Haran until his father died. Then God brought him here to the land where you now live.  But God gave him no inheritance here, not even one square foot of land. God did promise, however, that eventually the whole land would belong to Abraham and his descendants—even though he had no children yet.

God had promised Abraham descendants — as many as the stars in the sky — and he had no children.   Such a strange promise — and for years, I’m sure that Abraham wanted to doubt God.  I wonder if there were times though, that in great faith, he said to Sarah — we don’t have any children …. yet.

What is it that God has promised you?  Have you added the word yet to your thoughts and statements about that promise.  You might want to because God keeps his promises.

(I know, I know.  I had visions of blogging more frequently, but my life is just.... very.... busy.  Work is so cool and energizing right now, but I have little energy left for much else.  Which is fine.  I like my life to count for something and Vision 30 and CarePortal are going to change the lives of children and families.... so I'm ok with that.  Can't wait to see how God is going to make this all amazing.