When the Inner Fire Goes Out

In everyone's life, at some time, our inner fire goes out. It is then burst into flame by an encounter with another human being. We should all be thankful for those people who rekindle the inner spirit.

Do you ever feel like your light has gone out? I know yesterday morning mine sure did. I had been pushing myself so hard -- not sleeping much because I was excited to get up and get going -- and my adrenaline had carried me for almost two weeks since we returned from our vacation. But yesterday that light was out. I was exhausted and crabby and depressed. Fortunately, I had a couple of people I got to see yesterday and each of them contributed to a transformation that had been energized and smiling by the end of the day.

I have experienced this on a much larger scale in my past. I remember when the ATTAch conference was in Minnesota in October of 2000. I had been attempting to parent older kids for about two years at that point and any fire that I had as a human being had burned strong for the first year but by that time was completely gone. I had never in my life been so angry or so discouraged. I remember thinking, in reference to our kids, "this is NOT what I signed up for!!!!"

And then I went to the conference and heard Deborah Hage speak. She was probably at that time in the same situation I am in now -- several of her kids transitioning to adulthood, a few at home. She had been through the fire but was still resilient and energetic. You can see from her website that she remains so (I have kept up with her Christmas letters that she posts there ... in fact, this morning I caught up and I have to copy and paste a quote from one of her letters -- it's not the topic of this post, but it is a freebie because it's so good. I know it's not Christmas, but I think you'll get the point.

So Jesus comes, as Jesus does every year about this time, in the form of a small baby. The question becomes will we worship The Christ, as the Wisemen did, who knelt down in awe, gave gifts and then left, never to be heard from again. Or....... will we follow the Jesus that the Christ child becomes? We have Biblical pages and pages, text after text describing Jesus' work on behalf of the poor, the hungry, the weak, and the powerless. We have a couple of verses describing the birth of the baby. Yet what do we do? We spend months preparing to kneel down and worship the baby. However, Jesus is not there being worshipped. Jesus is not floating above the altar basking in all of the attention being paid. Jesus is not sitting around a tree opening presents. Jesus is outside....in the cold....in the dark.....with the immigrant, with the gay couples, with the hungry...with the unemployed.....with those being spurned. Jesus is looking in the window and wondering, "Whatever are all those people doing in there?"

Anyway, Deborah was that person for me in 2000. My inner spirit, dead and exhausted, was brought to life again in one of her seminars and in many respects I've never been the same.

I get emails these days saying that I have done the same thing for others now and it is so incredible to come full circle like that.

I can point back to many people in my life who have done this for me -- who after one encounter with them my soul has burst into flame -- and through knowing them my life has remained richer and fuller since the day I met them. The list is not long - maybe 10-15 people stand out -- but I can't imagine who I would be without them.

So has your inner fire gone out? If so I want to share with you three different things that are currently happening within the next couple months that might just be a place you would meet a person who could rekindle your flame.

If you're a mom, the mom's retreat September 21-23. I'm going to be one of the speaker's but that isn't why you should go. You should go to meet some of the other amazing women who are going to be there all weekend -- people who could be that flame ignitor for you. 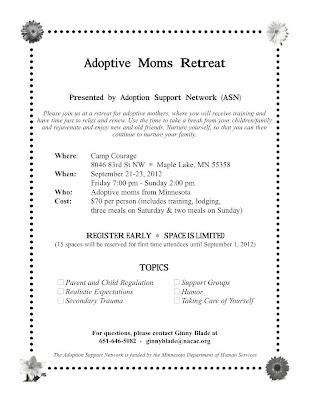 I'm also very excited to announce that the new church my husband pastors, Brunswick United Methodist in Crystal, is putting together a faith based special needs ministry for all parents of kids and adults with special needs (not just adoptive parents). We are planning to start with a faith based support group that deals with educational issues. We are hoping to provide child care and would love to see folks in the adoption community both take advantage of the opportunity to be part of the group as well as to help as volunteers. I am waiting on dates but will share them soon. Would love to hear if you are interested.

And finally, mark your calendars! A great group of women in the Twin Cities has been working together to host a Christian Adoption Conference and they have chosen to have it at our church on October 27th! The website isn't complete yet -- but if you would like a sneak preview you can check it out. There are so many exciting pieces to this conference -- including Bart, Kari, Deb and I as speakers -- that I hope you won't miss it! It's going to be such a great day.

I am spending my day today grateful for those people who have been there when my inner fire had gone out and could burst it to flame again.

Your quote of Deborah Hage's letter brought me to tears. Thank you for posting it.