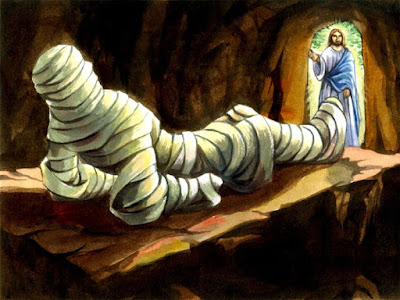 On what grounds do you place your faith?   Have they changed as you've grown older?

When I was a child, my grounds for believing in Jesus were basically because my parents said so.  I grew up, as you may know, with wonderful parents and I completely trusted them -- so when they said that Jesus loved me, I KNEW He did.

As I grew older, though, I had new experiences to add to that foundation.   When I saw him meet the needs of my family members as a teenager, it began to make more sense.  When I went to camps and retreats and watched lives being changed, I believed even more intensely and with a more mature faith.   As a young adult I had many experience that taught me that God was more than just the God of my parents but my God as well.  (Have I ever told you the story of a college football player who got drafted for the specific team I prayed he would?  That was COOL).

During my years in Mexico I saw how God transcended the barriers of language, culture, and socio-economic status and my view of who God was expanded.  Finally, when we began our foster and adoption journey, where a deep faith and conviction that God could carry us through was the only thing we had to hang on to, my faith was redefined.

When listening to the gospel of John (chapter 11) these words jumped out to me as found in the message.  Jesus was telling his disciples that Lazarus had died and that He was going to raise him from the dead.  He said...

You’re about to be given new grounds for believing.

The miracle that Jesus did in raising Lazarus from the dead was another stepping stone in the building of the faith that the disciples had in Jesus.   This was something new for them -- and had much more power than a piece of history that was told and retold to us as our faith was developing.   It obviously would have a huge impact on their faith.

We aren't asking Jesus to bring someone to life.... but hasn't he been able to bring to life multiple things in our lives over the years that have given us "new grounds for believing?"   Is your history, like mine, full of times where you thought things were dead... you had given up .... but Jesus came and breathed new life?  Relationships?  Dreams? Plans?  Visions?   Dead in the water until Jesus showed up?

You may be facing one of those today.   You may be almost out of hope that anything will ever change in that situation.   But you have been given new grounds for believing over and over again in your journey.   Look back at those and remember that nothing is to difficult for God and that even when something is completely dead, Jesus has conquered death -- not just physical death -- but the death of relationships, plans and dreams.

If you look back, you will see times when God gave you new grounds for believing.  So as you look ahead, pay attention to the situations in which He offers you even more opportunities to build your faith.