I know you'll find this hard to believe... 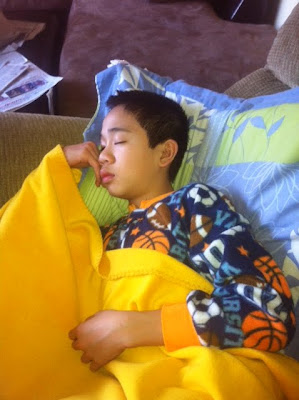 But I was away from my computer from Friday morning when I last wrote until now -- almost 4:50 on a Sunday afternoon. For me that is really quite overwhelming. It's also quite overwhelming to realize that I now have 322 unread messages in my inbox. Sigh.

So, why haven't I been here? Well, as you read on Friday I had a full day planned, taught all day, picked up Bart after he trained all day, and then came home, stopping to eat on the way. I ended up in bed by 8:45. Just exhausted.

On Saturday we got up and left for wrestling sectionals. Ricardo and Leon were both competing and even though Ricardo does not speak to us and has other people listed as his family on Facebook, we wanted to be supportive. He didn't speak to us, looked the other way so we couldn't catch his eye to smile or speak.

Leon, however, was just the opposite. Engaged, sitting with us between his matches, and just generally making us feel really good.

I took a bunch of picture which I will post when I get them transferred to the computer.

Ricardo lost his first match and was thus out of the competition, but Leon won his next round, but lost his next too. He still came in 6th in the section though and was allowed to march in the "Parade of Champions." Only a few other kids from our school made it that far so he felt pretty good about things. He's such a great kid -- joining our family at 12.

Tony had come with us, the rest stayed home... Wilson had just finished a lock-in and as you can see above he was quite tired (and unbelievably cute). Sadie had an interview to get her job back at McDonalds (she got it back and will have two jobs now) so she didnt' come along. Rand and Dominyk were participating in a 30 hour famine -- and Jimmy just gets really tired some weekends. His job is physically demanding and he gets worn out.

On the way home we had to stop at the ER because Tony scratched his eye ball and so we didn't end up home until about 7:15. I ended up going to bed around 8:30, but was awakened at 10 to have a very annoying conversation with one of my children that resulted in me being up until 1:30 tossing and turning, bathed in anxiety. 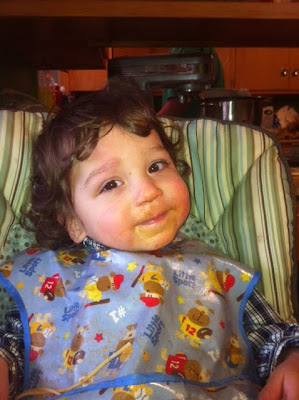 Choir at church this morning so I had to leave early and didn't get a chance to blog. Isaac and Courtney came to church and then over to dinner. Even with a nasty bump on his head from a fall and with Grandpa's delicious spaghetti on his face, he's still adorable.

I slept an hour and then Jimmy came with me to my office. I have a big training coming up this weekend (the 16 hour pre-adopt) and have more people than ever signed up, so he came to help me clean. That's where we are now.

So THAT'S where I've been.

Now, paperwork and organization of the office before we head back to town in time to pick up kids' from youth group because the van's headlights stopped working yesterday...

I just need to say at this moment that Jimmy, who goes by Ben at school and church, can really be a charming and wonderful son. He is being so helpful and engaging today -- willing to help out just to please me. Adopted at almost 10 from Guatemala, I don't think there's ever been a day when I questioned our decision to go there and get him. He definitely enjoys being "naughty", even at 20, but his helpfulness and desire to please, as well as his strong work ethic and fun sense of humor, make up for the hassles.
Posted by Claudia at 4:47 PM

My kids and I will be ready next year to add another kiddo to our family. Can you tell me how I would go about adopting through one of your organizations? I live in Arizona, and only have experience adopting locally from foster care.
Thanks!