19 Years Ago I Went to my First Wrestling Match 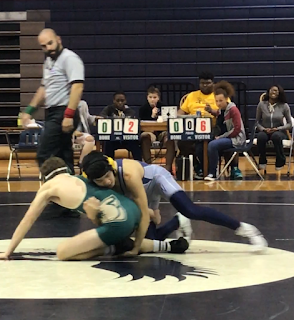 Nineteen years ago, soon after we adopted our first older children, I found myself driving Kyle, then 11 and in 6th grade, to his first wrestling meet.   He is now 30.  I remember more about how many times he wanted to buy snacks than how he wrestled, but it was my introduction to what it meant to be a wrestling mom.   It was a role I would carry for a very long time.

Tonight while Bart and I sat and watched our youngest son, Wilson, who is a Jr. in High school, wrestle, I started thinking back over all those years of sitting on bleachers hour after hour.

In those 19 years, nine of our ten sons have been wrestlers.  There was only one year in all 19 that I can recall that we had nobody wrestling.We have had sons who have wrestled at the lowest weight class (103) and heavy weights. Ricardo, as a 9th grader, received tons of awards that year.   All Conference team, all City team, most pins for the varsity team, most take downs on the varsity team, best record on the varsity team, and selected by his teammates as the teams' Most Valuable Player.

Leon got the coaches award that same year.  You can read about that night here.  It was awesome!

We also had the year when Tony as a 6th grader "should have gone to state" even though he couldn't make it to regionals because of whether so we won't ever really know.    We also had Dominyk's 4th grade year when he quit because "the whole thing was rigged.  I always got fourth."   We have had kids wrestle as pre-schoolers, and we have had them wrestle as seniors.   But next year will be our last.  Until, of course, we start going to watch our grandkids!

Wrestling has taught my boys a lot.   It has taught me the same things that my boys have taught me:  perseverance, how to keep going when you want to give up, when to try hard and when to just work smarter, how to route for the underdog, and how to hang in there when it looks impossible.

Each of my boys made me proud when the wrestled, all of them in unique ways.  So I guess all in all, it's been a great 19 years.

But my butt still hates those bleachers.

I'm only in year two as a wrestling mom, but hoping for many more! Thanks for sharing little bits of your experience.