Pick yourself up by your own Bootstraps!!! Now! 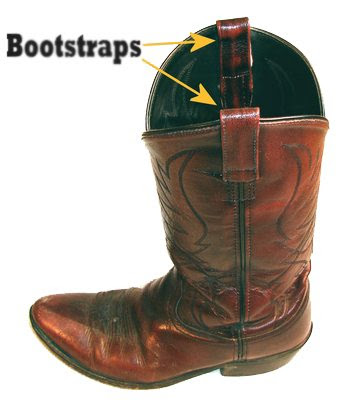 If you know anyone with mental health challenges or someone living in poverty, you probably hate this phrase as much as I do.  According to the Phrase Finder website, it means to


Improve your situation by your own efforts.

The origin of this descriptive phrase isn't known. It refers of course to boots and the straps that some boots have attached to help the wearer pull them on and to the imagined feat of a lifting oneself off the ground by pulling on one's bootstraps. This impossible task is supposed to exemplify the achievement in getting out of a difficult situation by one's own efforts.

The reason that this phrase is so distasteful to me can be explained by taking a look at two of my boys who will remain unnamed.  Both of them have IQs in the 70s.  They are hard working, easy to get along with, people pleasers who would do anything to help anyone.  They both have jobs and they work as much overtime at the gas station and fast food place that their bosses will give them.   I manage their money for them, and they live independently, but they will never be able to "pull themselves up by their bootstraps" and find a position that makes more than $15 an hour, probably for their whole lives.

Most of us would agree that these guys shouldn't be expected to do that.  But the truth is, according to Psalms 49:7, none of us can really do it.  It says:


Really! There’s no such thing as self-rescue,    pulling yourself up by your bootstraps.The cost of rescue is beyond our means.

Aren't we as humans often bound and determine to push for "self-rescue?"  If we just try hard enough we can get ourselves out of any mess we get ourselves into.  When we finally reach the end of all of the things we can think of, we go to God and admit to Him that we need some help.

But what if we recognized that the cost of rescue is beyond our means?  That Jesus paid that price and that He is the only one who can save us.... not just initially when we first come to know Him ... but every time we get into a mess.  He must be the one to save us -- we can't save ourselves -- not from the wages of our sin or from the daily struggles we find ourselves in.

Sometimes the song I choose doesn't exactly fit the message of the blog post... but this one clearly does.
Savior, please keep saving me...


(If these these seems familiar, I used this verse for post on July 26th.  Apparently I have some issues with this or someone needed to hear it again because I wrote the whole thing before I realized that I had already written about it!)