Today's a Holiday. So What Does that Mean? 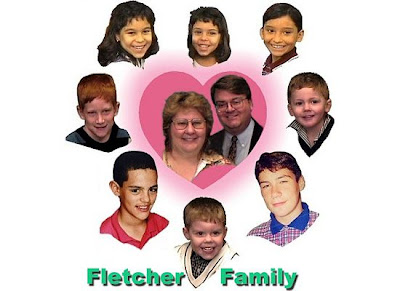 I ran across the picture a friend of ours did about ten years ago. WE only had eight kids at the time. Weren't they cute? It has nothing to do with the post, btw.

A holiday for me means my email will stay under control because even if I'm working others aren't. I'm excited about days like today, not because I don't work, but because I can get so much done.

Before you start doing the "you're such a workaholic why don't you spend time with your kids" routine, please note that I took the whole weekend off. I don't think I worked at all for two straight days and spent most of that time with the family. So today I get to catch up on things in an enjoyable way without pressure.

Plus, we only have five kids at home for three days and I'm husbandless. Sadie and Wilson have gone to camp and Bart is also with them. Wilson is a camper, Sadie a Junior Counselor, and Bart one of the camp pastors. Dominyk has a PCA today and so that leaves four, including MIke, who is usually not even around and if he is we don't know it because he seldom speaks to us. The other three are pretty innocuous although Ricardo is going to be sulking.

I was fairly pleased with myself last night that I dealt with the police officer without even waking Bart up. I was awakened by Ricardo who was spending the night at a friend's house with permission from Bart who didn't know he wasn't supposed to be there (he's spent a lot of his summer over there, but was late coming home Saturday by about .... uh.... 8 hours... so I had said he couldn't go back until further notice. I wasn't around yesterday when he asked Bart if he could go. I came outside the room and could see him standing in the foyer and assumed he was with his friend or alone. I started to point out to him that he had no permission to be at his friend's when Ricky said, "Der's someone here Mom." ANd I heard a voice say, "It's a police officer, ma'am." Fortunately (or unfortunately) she's been here before once when Salinda was doing something and so she already knew our foyer well.

Apparently Ricardo had had only a few sips of something at a party at this house that was going on while the parents were sleeping. I have had some questions about the place but knew taht eventually something would happen, as Ricardo has denied ever doing anything he shouldn't at the house. Stuff eventually catches up with these kids... and I knew it would. So I gave him a short lecture, sent him to bed, and went back to sleep. I told Bart this morning, but I didn't see what the sense was in waking him up to tell him last night.

Goes to show that I've changed a lot in the last 7 years. 7 years ago we both would have stayed up hours talking about it, not been able to go back to sleep, adrenaline pumping. Now I just yawn.

So I'm ready to get some things done. Our air is still off, so I'll work here until it's just too hot and then I'll head to my office where it's nice and cool.
Posted by Claudia at 8:29 AM

LOL- I still remember the first 2 am phone call I got from the police- one of my foster kids was picked up in the next state in a stolen truck with a stolen guns. That was thirty years ago. Thank God that I don't get those kind of calls anymore.