These are the Days of Our Lives 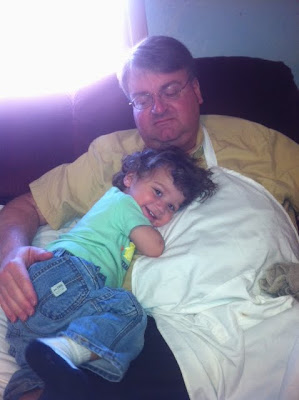 So.... I have a few minutes this morning to blog and I'll fill you in on a few things that matter.

1) Isaac is adorable. But you knew that. He was here on Thursday and will be back today. He is at a really cute stage and learns new tricks and words every day. For example, when I say "Who's cute?" he says, "Iiiiiiiisaac." The other day Bart started this thing where he says one......two.....three..... GOTCHA and grabs him. Bart holds up one finger, then two, then three... you get the idea, you're bright. When Isaac wants him to do it again he holds up his hand trying to make three fingers and says "Treeeee." Beyond cute. He also can say Grandma now, not quite as clearly as his scratchy low voice "Grandpa" but pretty close. He's very fun to have around and I'm counting the hours until he is back today.

2) Last night Wilson had two friends over and they decided to take a 12:30 a.m. walk "two blocks" to one of the two friends' house which was really more like a mile and a half away. Fortunately, his mother heard them sneaking into her house even though I didn't hear them sneaking out of mine and kept her son at home and brought the other two back here. She called me at 12:30 but I didn't get the message until 2:45, which lead to 90 minutes of no sleep for me thinking about how sneaky he was and what consequences would help him learn (he does learn from them) and all the horrible things that could have happened. I got the other friend up early this morning and gave him a ride home and he got a very lengthy lecture. Now Wilson is in the shower -- and has been for quite a long time. I think he might be avoiding a conversation with me which I understand.

3) Job Corp. Orientation Thursday was interesting. If the program is what they say it is, it might be a very good option for a lot of our kids. They have a NO tolerance policy for a lot of things as there are people wanting the slots and it's all funded by the federal government. On top of all of that, if they get arrested on that property it's a federal crime.

Anyway, the program makes kids toe the line. Most finish the program in a year, but they have 2 years to complete it. Some finish in 8 months. They leave with a diploma or GED (only the diploma option if you are a true senior) and a certification in a trade. Examples include painting and wallpapering, CNA, Medical Secretary. Carpentry, Auto Mechanics, etc. They also have an Advanced Career Training option for the very motivated where they can attend college. The kids get a small stipend every two weeks (25-50) and have all their meals, transportation and entertainment covered. They have two weeks off for Christmas and two weeks off in the summer where transportation home is paid for. Transportation is also paid to get them to the program and home if they complete the program. According to the people we have talked to, it is income based, but having an IEP qualifies kids as their own financial case. In addition anyone who is receiving Medical Assistance qualifies (if I understood correctly).

Tony is a verbal processor and so he talked it out on the way home... and talked it out and talked it out. I think he changed his mind 8 times about what he wants to do during the 2 hour ride home. I'm not sure that he has arrived at a conclusion but we have an interview in a couple days to further clarify what he is going to do.

Today is wedding shower plannning day and we are having the Coffees over for dinner -- YAY....
Posted by Claudia at 9:07 AM

Baby shower, not wedding shower. Don't go putting the horse before the cart.

Two of ours went the Job Corps route. One already had a hs diploma and he simply completed a general office course. Honestly, I don't think it was a good choice for him, but we didn't know any better at the time. He was not into any kind of trouble before then, just lazy and unmotivated and consuming lots of our resources - refused to get any kind of a job, had to be pushed and pushed and pushed to complete high school (enough ability but NO self motivation). He could have transferred to a different Job Corps and had them pay his attendance at community college, or taken other advanced training, but he then tested positive for pot use, so the other center rejected him and he spent a couple of years homeless, including getting into some worse trouble.

Second son that went the Job Corps route did not have a hs diploma when he started, but did get one. (diploma or GED depends on the JC location - our current local one is affiliated with a local hs, so ALL the kids end up with hs diploma, not GED. He also graduated with a CNA. If he was willing to do it, they would continue to provide training for his LPN, or pay for off-campus housing & tuition in an RN program, but at this point he is avoiding school like the plague.

BTW - have you also considered the National Guard Youth ChalleNGe program for any kids who are struggling in a normal academic setting? Supposed to have a really high success rate. Didn't work so well for us - one kid was in the very first class in IN, but unfortunately got kicked out a few weeks in for fighting.

Sure, Sure, Kari, you gotta proofread everything for me dontcha?

Maybe i was wishful thinking. ANd since when is the cart and horse not the other way around?