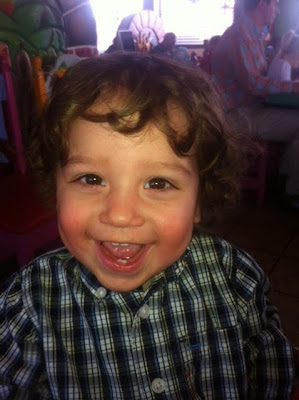 A meeting that Bart and I had yesterday got my mind spinning and I had a really hard time falling asleep. I then woke up at 4:20 and couldn't go back to sleep, so I'm hoping that my 4 hours of sleep will be enough to get me through the day.

Even though we have told him to keep it a secret, we are looking at some other possibilities for Tony regarding school. He is really going nowhere fast where he is. He has managed to get kicked out of a couple of his classes due to poor attendance or behavior, so he has two study halls. He is taking woodworking and foods and loves them, but is pretty much failing his other classes. So today I'm doing some exploring, on top of everything else, to find out if there is another option for him out there. I have one big lead and if it works out I'm telling everyone!

Things are fairly stable at our house these days. The kids are far from perfect, but several of them are doing what they are supposed to be doing, generally, (with the exception of homework). We can leave them alone for stretches of time without having to worry about the need to call law enforcement to break up a fight, and they seem to be calmer.

I also did away with the normal chore routine around here. It was a daily battle with a couple of the kids and it resulted in so much stress. There are three kids who owe us money, and another two who have pay-as-you-go phone bills to pay, so if they are motivated they can ask for chores. Nobody is assigned chores any more -- just those who need money can ask for them. It means the house is a little less clean, but not much less as some of the kids refused to do them anyway.

Oh... and something terrible happened yesterday. It was so awful I thought for sure I was going to throw up. Bart and I were in a meeting and during a break from the meeting I got a text. It was from Courtney and it simply said, "um, I'm not going to be able to have you and Bart babysit for Isaac any more." We were perplexed as we had just had lunch with them and they had been at church, but she had been to see John between times. What had he told them? Or what had happened while he was at the house? I was really sick to my stomach at the thought of having done something that would keep this little guy out of our lives. I was also pretty disgusted with this generation that thinks you can text serious stuff like that.

About an hour later, when our meeting was over, I looked at my phone and a text from Courtney, "OK, you are taking too long to respond. I can't take any more. April Fools. Ha Ha."

After she found out how upset I was she felt really bad. But suddenly I felt really good. Because paybacks are in order. She is so dead. Nobody has gotten me like that in a long time.

I'm telling you what... this little guy has stolen my heart. Dang I love him!

Every time we get out a phone or camera to take a picture he now makes this face: 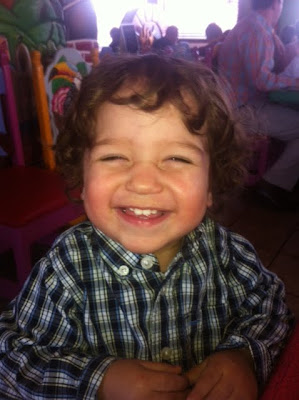 Here he is wearing a pair of sun glasses Leon let him try on: 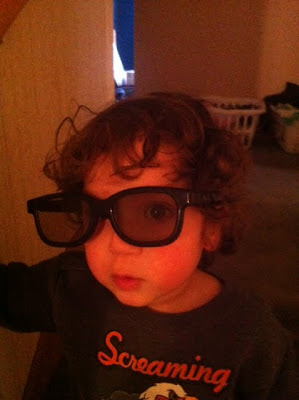 Well, he is certainly one of the cutest babies I've ever seen! I can see why your heart melts every time you see him.

Our girls have done well with community based work program through school. Academically they leveled out and the stress of the school environment is too much. We meet this week to do a eval with MRCI and the school to see if we can get them into the full day work program instead of just the half day they are doing now. Normally only seniors can do the full day but the school is trying to get us an exception for the last quarter, which is in our opinion the worst quarter of the year for our girls.

He is just too adorable - and he looks like a pretty darn happy little guy to boot. I am sure his smiles soothe your soul.

Courtney had better watch out!