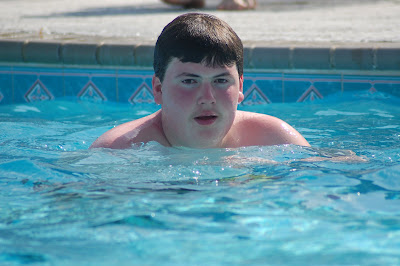 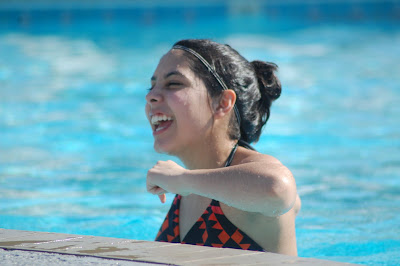 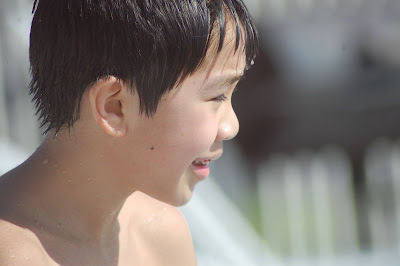 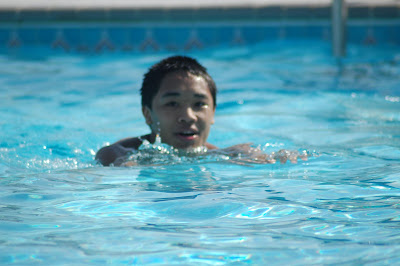 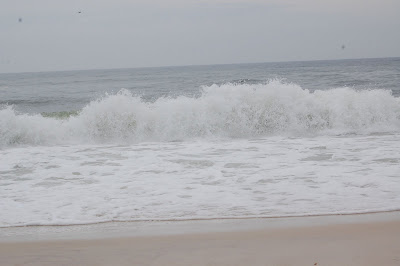 We've had a very nice day. Spent a couple hours by the ocean but it was a bit cloudy, though warm. Then we headed in for our Sonic lunch during Happy Hour -- and had half price drinks with our food. We came back and I actually got into the pool after lying near it and reading a book. I even played some baseball, volleyball, and catch with Leon and Sadie.

I realized it had been a while since I had done anything like that because Leon and Wilson have lived with us 3.5 years and they had never seen me in a bathing suit. It was fun to hang out with them. Dominyk got quite sunburned today because he refused to put on sun screen. Hopefully he has learned something for next time.

Because of his sunburn he opted not to join us at Doc's seafood shack, but the six of us had a wonderful time. I had the best fried shrimp I've ever had. Leon and Wilson decided to be adventurous. Wilson ordered WHOLE crabs, and Leon ordered fried Oysters. Bart had steamed shrimp, but it was cold unlike he was expecting. He realized that he should have had fried shrimp like I did. Sadie ordered a burger and after she had tried my shrimp said she wished she would have ordered shrimp. Wilson decided he would have rather had my shrimp, while Leon wished he would have ordered the crab. Ricardo, who had a cheeseburger, piped in, "I shoulda had a cheeseburger." I congratulated him for being so adventurous. He said thank you. I LOVE it that he gets sarcasm.

We got home late and I'm getting ready to crawl in bed with a book and fall asleep as soon as I feel like it. I coudl really get used to this vacation thing....
Posted by Claudia at 8:15 PM

cant believe how grown up dominyk looks all of a sudden :) glad youre having a good time

"Leon wished he would have ordered the crap."

??? I thought you were saying it was so good!

You have me beat Claudia, I will be in a swim suit for the first time in 19 years tomorrow. I plan on going down all the crazy water rides if I can make it up all the stairs.
Show pictures of the place your staying at.

My family went on a cruise a few years ago and when my dad put on a swimsuit, I realized he hadn't worn one since I was in preschool. His baldness extends beyond his head to his legs. It was kind of shocking to notice.

Glad you're having fun! Wish I was there to see you sunbathing in your bikini. :-)

"I LOVE it that he gets sarcasm."

Claudia, that is not Jeremiah writing.I'm not sure why he is coming up. This is Jill