Waking Up in Dyersberg, TN 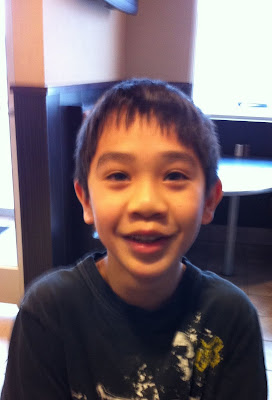 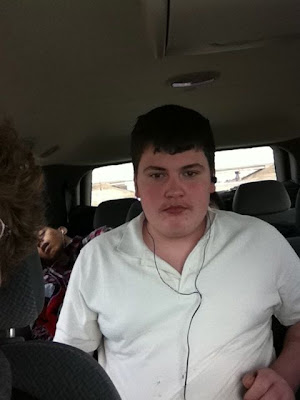 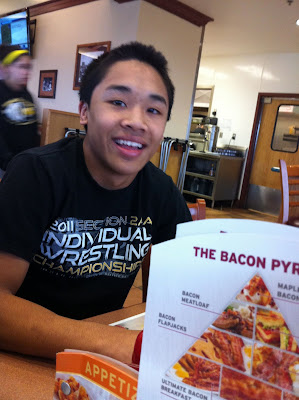 The trip took 14 hours yesterday -- but that was because we stopped for a couple of lengthy meals. We could have done it in 12.5 had we not -- I could have especially avoided the Denny's right across the Iowa/Missouri border. It was the only choice within miles and had a smoking section where the only large table was located. Apparently you can smoke in restaurants in this particular Missouri town except for on Sundays from 7-3. So we dealt with the smoke but the food was good. They were having a big feature on Bacon which Leon absolutely loves (he even bought bacon lip gloss once).

Dominyk did very well for about 9 of the 12 hours. And the other kids were perfect for the whole trip. And then last night Sadie stayed in our hotel room and the other four boys down the hall. This is the first time since Dominyk was 9 months old that he stayed in a room without us and he's almost 15! Since when one of us is near him he rarely stops talking, it was really nice to have the break.

We are definitely in Tennessee! The accents and the speed of people (fast food in the south is really an oxymoron) is way slower. Last night we learned about farm equipment on TV that is drrrrrrbul. Yikes.

This morning we have had breakfast and will leave by around 8:15, hopefully getting us to our Vacation Rental By Owner by 5 (thanks Cindy for the tip on the website to find it) We got a really good deal and will be there until Friday.

The biscuits and gravy I attempted to have a bit of this morning at the hotel's breakfast (I know, I know, not exactly low carb) were made out of elmers glue and now my stomach is reminding me of why that kind of stuff isn't a good idea (and I only ate about 4 bites).

So don't you wish you were with us? Me whining and burping and Dominyk obsessing about how much he needs a pop (He started as soon as breakfast was over).

Check out Ricky snoozing behind Dominyk -- he can really sleep! And I gave Sadie a break and didn't take pictures of her without makeup for Facebook or the blog. Didn't want to traumatize her.
Posted by Claudia at 6:53 AM