Our Time WIth John 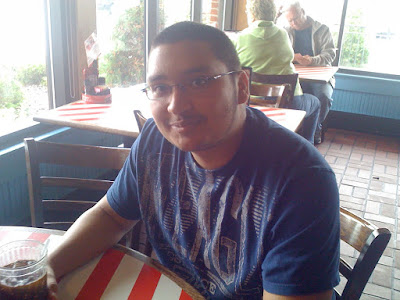 We had such a nice time with John yesterday. He has grown up so much. He's lost a lot of weight too --a bout 35 pounds, and looks good -- strong and steady. He's been working out and really is doing great.

He hasn't had any incidences in several months of being aggressive.....

He's talking about the military when he finishes high school, which I think would be a great plan for him.

He has only spent one night here in the last year, but we're considering inviting him for a weekend. It would be a risk -- he could make some horrible choices with connections he has here in town, but if he does, he does.

I'm trying to let go of my need to control the situation and just let him make his choices. And hope to enjoy him for who he is regardless of what he might do and let go of that need to make sure everything will be OK if he comes home.
Posted by Claudia at 4:23 PM

With all due respect, if you bring him home - with all of the impressionable minors living in the home - it is responsible to worry about his choices if staying there... right?

Important question. Historically, John's decisions (unless he is being aggressive, which hasn't happened in almost a year) have not affected our family. The choices he might make would include calling an old friend and possibly sneaking out to meet him. He's never brought his trouble home, (unlike Mike). If I were worried about him doing something that would endanger or even cause anxiety for the other kids, we wouldn't be contemplating letting him come home even for a day.

I would never think you'd endanger your other kids!! Salinda just seems to be making good choices from what you write and she seems impressionable.

I sure assume to know a lot from reading a blog, don't I??

If he is making such good progress and has a set back while visiting at home, would they still allow him to come back?