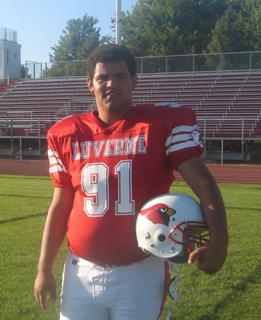 Rand moved in with us when he was in 5th grade. He was diagnosed with Panic Disorder.

He had played basketball and was a tall kid, so we signed him up for fifth grade basketball. After the first few weeks, when practices were leading to games, we found out he had never been to practice after the first few days. He had been hiding in the bathroom.

This pattern continued. We'd give him a break, he'd beg to be in a sport, we'd sign him up, and then, a week or two later, we'd find out that he had been skipping practices again.

So this year he wanted to go out for football and to say I was dubious was an understatement. I even told him that this year, he would pay for his equipment and his registration himself to see if he was serious.

Well, the first two weeks of "two a days" are over. The coach, knowing his history, has had the team surrounding him with encouragement. We only live a block and a half from the school, but one of the players has given him a ride to practice twice a day every day. And he's survived. Last night we went to family night and stood with the other parents and watched him fit in. Third tallest on the team -- 6'5 and 300 pounds. Today they are scrimaging and he got himself up at 6:30 to go with the team.

The bottom line is progress. As adoptive parents, Bart and I can seldom compare our children to other kids the same age. But what we can compare them to is to their former selves. Rand still has a lot of progress to make, but compared to his former self, he's come miles.