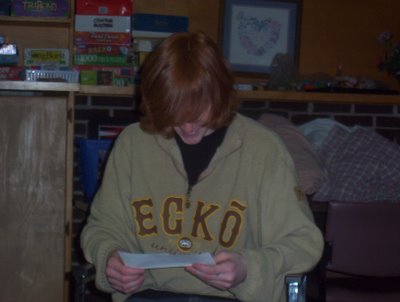 I have been away from blogging for 36 hours or so, which is really weird for me. It has been a long 36 hours.

Immediately following church yesterday, we ate something quick and were in the car/van by 1:00 to head to St. Cloud. We made excellent time and got to the group home a little after 4:30. When we arrived, Mike was waiting and they let us go back to the community room. Everyone was very appropriate and watched Mike open everything.

When he got to the final gift, it was an envelope. The envelope had a note saying, “Go pack your stuff and come to the hotel with us. We’re ready for you to be home and we believe you are ready to come home.

He was shocked but so excited. If you can peak under his hair here you can see a big smile.

As I mentioned in this post we are taking a huge risk. However, we decided that we have got to put our relationship with him first priority. He’s almost 17 and we’ve only got a limited time left.

We went back to the hotel to meet my mother-in-law and sister-in-law and ate at a ”slow food“ (as Dominyk calls it) restaurant. It took forever (I think we were there nearly 2 hours) and the menu was limited for Christmas day and spendy. There were only about 8 choices and we kept pretending to urge the children to try the Tuscany Duck, but they were not amused. The kids who had free kids meals coming wanted $17.95 steaks, and the kids too old for kids meals were wanting kids meals, but refused to trade. It was delightful.

As always we had meltdowns about having to go to bed too early (11:15) and arguments about silly things.. I’m sure they were typical of most families, but as parents sometimes we have mini-meltdowns too, and that doesn’t help. But as I have mentioned, we succeeded in running our kids completely ragged over the past 4 days.

We arrived home at 4:30 this afternoon. Dominyk and Bart are feeling sick and I’m tired as I drove all the way home. So far, everyone is doing OK considering we’re all in the same place for the first time in since October of 04. By the end of the week we should all be living here.

This is the beginning of a new era for us and I am going to have to cut back on work hours to accomplish it. I am really hoping that it doesn’t affect how many kids I can get home in 2006, but my kids have to be a priority. This is going to be a crucial year.

My plan for the reintegration of the boys is lots of communication and to stop trying to stop them from making mistakes. It only makes them want to do it more and makes them more sneaky. I spent a great deal of time and energy for years trying to think ahead and stop them from screwing up. They proved to me that no matter how hard I tried, they could still do it anyway. I really hope that I can back off an help them process decisions instead of jumping ahead and trying to prevent bad choices, but it’s a bad habit to break.

So, that’s the surprise and the update. We’re all tired and hoping to survive a week full of dentist, doctor, eye doctor, haircut and work appointments in the process of parenting lots of kids.
Posted by Claudia at 7:42 PM

I remembered you had a surprise and I've been checking all day to see if you had posted. Guess I really need to get a life. I'm praying for you and your family and praying that God give you wisdom and discerment through this transitional period. Best of luck!

The first thing I noticed was Mike's smile! You will all be in my prayers as you begin walk down this new path. Merry Christmas!