Lessons learned from the Pros 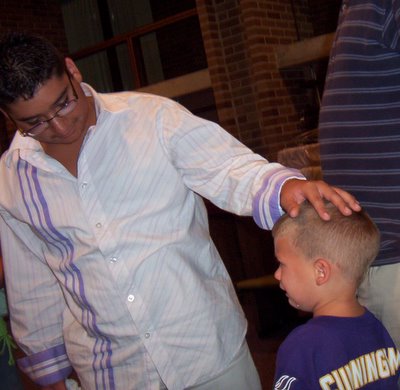 Two of the 12 or 14 blogs that I read daily are, as you know, Cindy's, and Paula's I look to these women as “pros” because they have raised/are raising lots of teenage boys. I admire them because they are a whole lot nurturing than I and because they can always see their kids as hurt little souls regardless of how big they get.

I’m having a new experience raising John. Kyle and MIke never attached to me. Kyle was Bart’s son from almost day one, but only recently considers himself my son, and only if he doesn’t think about it very much. Mike, as I have mentioned, never really attached to either of us, but has gravitated to Bart from the beginning as well. Rand is probably equally attached, but if he can choose between one or the other, he’ll always choose Bart.

John, on the other hand, loves his mom, so for the first time in a life of a teen in our home, I am the one most responsible for his emotional well being. I think it may be because his birth mom never really showed him she loved him. John has two perfect little sisters that the birth family doted upon. They have a different birthdad, and the birthmom’s family made it clear always that they didn’t like John’s birthdad. They said things to him when he was just a little guy (I’m talking 3 and 4) like “you’re going to end up just like your dad, and there’s nothing you can do about it” or “you’re going to end up in prison just like that *&)(()*&*() dad of yours.” So he followed their plan for his life and managed to be expelled from kindergarten. The birthmoms boyfriends beat John, and the girls received only a little of the abuse, if any.

But having me be the key, instead of Bart, is hard to get used to. OK, enough background. Now on to what happened last night.

One of the things that John has a horribly hard time with is accepting responsibility for anything. It frustrates us to know end. Last night it all came to a head when Tony, who his ten, bugged John until John punched him. Now John had to leave our home because of his aggressiveness so this was a big concern. Basically, all we wanted was for him to say, “yup, I punched him, I shouldn’t have.” But that wasn’t going to happen. Instead he had to go on and on about how Tony shouldn’t have bugged him and how it was Tony’s fault.

One of us made the mistake of saying that if he couldn’t admit that punching a ten year old was wrong, maybe he wasn’t ready to be home for every visit. So he said he was leaving and went outside in the below zero weather, saying he was walking to the ranch. This is exactly the same behavior he has been using for about 6 years -- he threatens to run away, walks outside and roams around the house. Back in his worst days he would be throwing things at the house, hitting it with sticks, acting like he was going to break windows, and his siblings, half of them diagnosed with PTSD, would freak out.

Last night I thought he had really left and I was pretty upset. I went to look for him, to make sure he wasn’t walking down the street. However, I was pretty sure he was on our small lot somewhere. Sure enough, about 20 minutes later I sent Rand out to follow his footsteps, and he was hiding within ten feet of our property.

I know, this is like WAYYYY to long of a story, but now that I’ve gotten this far...

He came back in with Rand, and having read Cindy and Paula’s blogs, decided I would attempt to handle things like I thought they would. Instead of seeing this 200 pound angry teenagers, I saw a scared hurt little boy. I told him to take off his wet sweatshirt, and come sit on the couch with me so I could help him get warm. I covered him in blankets and he put his head on my lap. I sat there quietly, running my fingers through his hair for over 15 minutes.

I sat there thinking during those 15 minutes about what I have learned from the pros and tried to reframe the situation. I concluded that possibly John won’t accept responsibility because he is afraid if he does, we won’t love him any more. Using coaxing and humor like I would with a five year old, I convinced him to talk to me. I tried to help him understand why we get frustrated with his defensiveness, but reassured him that we love him and always will.

I think that the reason that Cindy and Paula are my heros and the pros, is because they have been doing this for such a long time. Cindy has been a parent for 30 years, Paula for almost 20. I have been a parent for exactly 9 years, 1 month, and 27 days. I have sucked at it in many ways. I have taken things too personally and taken my kids too seriously. I have not been able to disengage (get sucked in like 40 times a day) and can’t self-differentiate. I’ve made many, many mistakes along the way.