I Have a Teenage Daughter 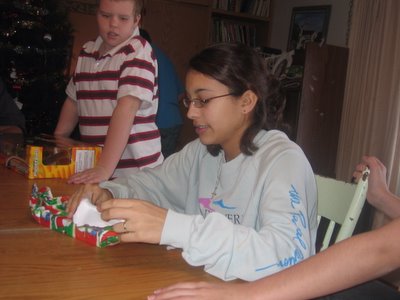 As of today, I am the mother of a teenage daughter. Today is Salinda’s 13th birthday. She was every mother’s dream child and I’m crossing my fingers about her being every mother’s dream teenager, but we’ll see. She is responsible, mature, beautiful, talented, and when she isn’t home she is kind, caring and considerate. She has her father’s personality, which is amazing since he had no genetic input.

I much prefer teenage boys, even though that may be odd for some to understand, but I’d rather be screamed at, cussed at, even threatened with violence, than to listen to the hurtful, spiteful, clever insults that a girl can come up with when angry. And the thought of some slimy teenage boy TOUCHING either of my girls makes me internally quiver. I just don’t think any one is going to be good enough for them.

Anyway, I digress, right now Salinda is trying to help me pack for the trip to see Mike. Bart decided that it was crazy for the whole family to go to 4 services in 16 hours, so he told me I should let the kids sleep in this morning. Our second service is casual, so that will keep us from all having to change clothes before hitting the road. It’s a pretty good plan, in some respects, but he is definitely getting the better deal. The idea of course, was that everyone would get more sleep. The truth was that they were up screaming by 8:30, only 30 minutes later than they would have gotten up on a normal day.

We really haven’t had a bad week. Tony and Dominyk are the only ones left who can’t hold it together, which gives us hope that some day they all will. I have had a hard time holding it together though -- the schedule we have thrown together for this family for the last few days until tomorrow is way too much. When I think it’s too much, then of course, it has to be way, way, way too much for my kids.
Posted by Claudia at 10:16 AM